“Everyone was in white gear, fighting each other. I loved it and it [so] happened that I became really good at it.”

However, the two Games didn’t go as well as she had hoped, and she left both competitions without a medal.

“I was really disappointed. I reflected a lot about this experience. I had been in Paris for eight years at the time and I thought about going out of my comfort zone,” she explains.

Driven by her disappointment she moved to Los Angeles, US, in 2017 with fellow Olympic fencer and boyfriend Race Imboden to experiment and work with other fencers and coaches. 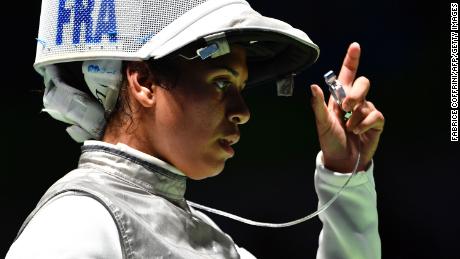 READ: From the Olympics to outer space

‘I have my own history’

As well developing her skills on the fencing piste, Thibus has increasingly used her platforms to raise awareness of social injustices, given her own experiences in France and the US.

The killing of George Floyd by a Minneapolis police officer in May ignited protests across the globe and inspired Thibus to join different Black Lives Matter demonstrations across the US.

Despite admitting the marches were “painful” to witness, she says there was a lot of hope that the world could change for the better.

“I’m an athlete, but first I’m a woman. I’m a Black woman. And I was in America when it happened. So it hit me hard,” she explains.

“It moved everything inside me. I could not stay silent. It was very painful but I had to do something. I have my own history as a French person, coming from an island where slavery happened.”

Guadeloupe, was colonized by the French in 1635. Up until the middle of the 19th century, the French had a slave society created for developing tropical agriculture, primarily for sugar cane. According to UNESCO, 84% of the island’s population were slaves then. 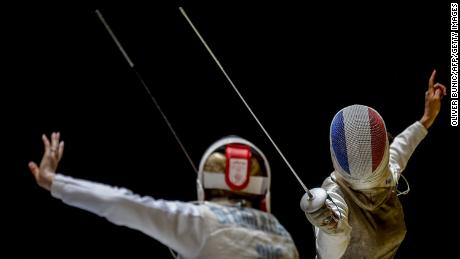 The BLM protests resonated in France, especially as July saw the four-year anniversary of the death of Adama Traoré — a Black man killed in similar circumstances to Floyd.

“We are two different countries [US and France] and we have different stories. I didn’t want to watch it from afar and say, ‘this is something that’s happening in America and this is terrible,’ as if nothing’s happening in France.”

She added: “We have our own stories about police brutality and systemic racism.”

Fencing hasn’t been spared when it comes to racism.

In June 2020, in the middle of protests against racial injustices, fencing coach Boris Vaksman from St. John’s University, New York, was recorded making racist comments about Black people during a private coaching session over Zoom.

The board team of the university, which is part of the Olympic Development Program, terminated his contract requiring “him to take sensitivity training and community service.”

USA Fencing in an Instagram post said it was “disgusted by these statements, which are racist, offensive and have no place in the USA Fencing community or in society as a whole.”

St. John’s University fencing club has confirmed to CNN Sport that the coach “did apologize, expressed regret and was repentant.”

Vaksman did not immediately respond to CNN’s request for comment. 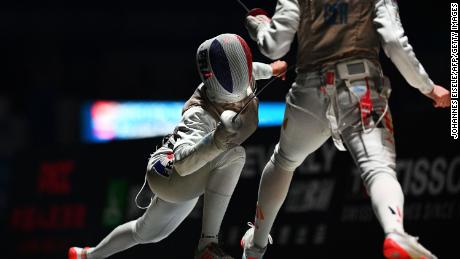 READ: She saw herself as ‘shortest, fattest high jumper out there’

Should competitions be neutral and free from politics?

The International Olympic Committee’s (IOC) Rule 50 states that the field of play and medal events should be “separate from political, religious or any other type of interference.”

In July, IOC president Thomas Bach said the organization’s Athletes Commission will consult on the rule, with a recommendation to come in early 2021.

“Athletes have the responsibility to represent the interest of everyone believing in them, in and outside the sport. So if the society doesn’t go well, it’s also their role to speak up,” explains Thibus, who says Rule 50 isn’t something that athletes are always aware of when starting out.

“You realize this when going to places [competitions], and they kind of shut your voice because you’re there to win medals,” she says.

“And then you realize that you’re considered just as an athlete and not as a person, it’s confusing.

“The Olympic Games is a business right now, and they have a responsibility to all their ‘friends’ and athletes to entertain. But I don’t believe that because you’re going to a place, you’re leaving behind all the problems of the society.” 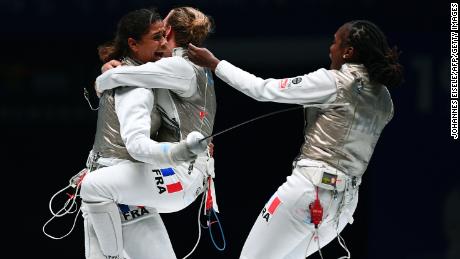 Kirsty Coventry, chair of the IOC Athletes’ Commission and an Olympic champion swimmer from Zimbabwe, said in a statement sent to CNN that “every athlete voice matters and we want to hear them.

“We encourage Ysaora to engage with the Athletes’ Commissions of the French National Olympic Committee and the International Fencing Federation, or directly with us to share her views as we would very much appreciate her contribution.”

Thibus’ partner Imboden had previously protested at the Pan American Games in Lima in 2019.

He took a knee during the national anthem after winning gold in the men’s foil team event to protest racism, gun measures and mistreatment of immigrants.

“These are discussions that a lot of athletes in a relationship talk about. We decided that we don’t want to not be able to talk,” she says.

“When Race [Imboden] protested in Lima, he had amazing feedback. People were inspired and thankful. They were grateful for what he did because they felt that someone was caring about their issues. It’s just powerful to be part of a positive movement.”

Protesting at the next Olympic Games isn’t something that she’s necessarily planning on doing but “if I feel the need to do it, I would do it,” she concluded. 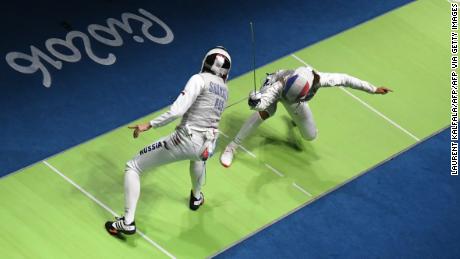 READ: ‘Oh you must be heavy boned.’ Marilyn Okoro’s fight for body acceptance

Due to the ongoing Covid-19 pandemic, fencing competitions were called off a couple of days before the Anaheim Foil Grand Prix in March, though the International Fencing Federation has announced that competitions will resume from 1 January 2021.

Throughout lockdown, Thibus continued to train as if the Tokyo Olympic Games would still happen in 2020, but she also had time and the opportunity to think another issue she feels passionate about.

“I’ve always been a feminist, it’s always something I cared about. Female sport is my field, it’s my world,” she says.

“Because it’s a very masculine world, I’ve always felt that we don’t have the same chance to express ourselves.”

Thibus often voices her concerns about this issue on her social media platforms, notably when mainstream media overshadow women’s achievements.

As a result, she started EssentiElle (“Elle” means “She” in French) — a space for female athletes to talk about their stories, lives, challenges and victories.

US track and field star Gwen Berry is part of the first series released on EssentiElle’s Instagram page. Thibus is hoping to interview tennis star Naomi Osaka and French fencing legend Laura Flessel for her next series.

“I noticed that [mainstream] sport media in the US or in France, still talk a lot about men’s sport all the time. We’re in 2020!

“Is it just because there’s not the same investment or mediatic attention?” she asks.

“The idea that its [women sport] not the same as male sport is still present, that it doesn’t deserve the same attention. It won’t be entertaining the same way,” she explains.

“As a female athlete, I’m working as hard as a male to have the Olympic medal. I have the same goals so I should have the same opportunities.”

They were found in a South Abington Township home after officers responded to a call for a gas leak at the house. ...
Read more
Travel

The Zhangjiajie National Forest Park in Hunan, China is famed for its towering, pillar-like karst formations, and bears a remarkable resemblance to the...
Read more
Business

People tend to look at economics through of their personal experience, a report funded by the Office for National Statistics (ONS) has found. Source...
Read more

They were found in a South Abington Township home after officers responded to a call for a gas leak at the house. ...
Read more
Travel

The Zhangjiajie National Forest Park in Hunan, China is famed for its towering, pillar-like karst formations, and bears a remarkable resemblance to the...
Read more
Business

People tend to look at economics through of their personal experience, a report funded by the Office for National Statistics (ONS) has found. Source...
Read more
Health

Long Covid: How knowledge of ME could help sufferers

While both ME and long Covid, or post-Covid syndrome, are long-term illnesses, they aren’t the same thing. But, there are ways in which...
Read more
World

Yemen: Growing up in a war-torn country

Yemen has been labelled the "the world's worst humanitarian crisis" but with 60% of its population under 25, what’s it actually like growing...
Read more
Load more